This weekend, while many of us were holiday shopping/preparing/celebrating, two important developments occurred with respect to the Affordable Care Act.

First, on Friday evening, a federal judge in Texas, U.S. District Judge Reed O'Connor, ruled that the Affordable Care Act was not constitutional.

What is the lawsuit?

The case, Texas v United States, was filed in February, 2018 by 18 Republican state Attorneys General and 2 Republican Governors – subsequent to the December, 2017 tax law passed by Congress. That tax law removed the federal penalty for not having health insurance, starting in 2019; while the individual mandate officially still exists in statute, there is no longer a fine or tax for noncompliance. (You should still buy health insurance, though!)

What did the decision say?

First off – know that nothing has changed yet. The Affordable Care Act is still in place as the law of the land. That is because another group of state Attorneys General (representing 17 states, including Connecticut) has already announced it will appeal the decision, to the 5th Circuit Court of Appeals. While the appeal is underway, the law remains in place. It is possible that the case will eventually end up back at the Supreme Court. Stay tuned.

Meanwhile, unrelated to the lawsuit, Access Health CT announced on Saturday that it will extend the Open Enrollment period for buying health insurance to January 15th. Open Enrollment was expected to end on Saturday, so the extension is a welcome relief to those who had not yet purchased insurance for 2019! Access Health CT will hold three enrollment fairs over the next month, and, of course, CT’s health centers are ready to help with enrollment as well! Find a health center here.

Get in touch with any questions! 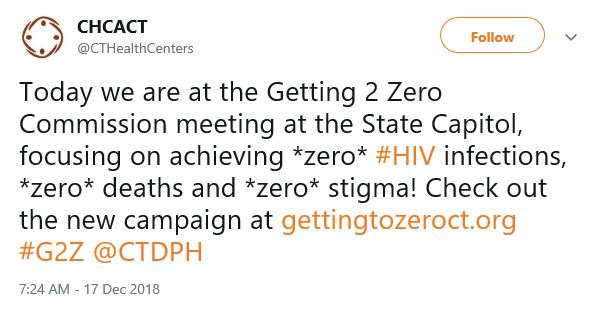 National / Other Health News
12.17.18 Hartford Courant — Vaping Surges Among Teenagers, While Other Drug Use Dips
12.17.18 Governing — “Ripe for an Outbreak” – Vaccine Exemptions Are On The Rise
12.16.18 CT Mirror — Nurse Denied Life Insurance Because She Carries Naloxone